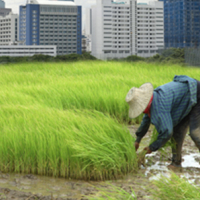 Even though there has been strong evidence that global warming has negative impacts on an economy, global carbon emissions have been increasing. Carbon emissions in the East Asia region has also shown a similar trend. The governments in East Asia have not implemented effective decarbonisation policies, presumably because so far limited analysis of the socio-economic and environmental impacts of these policies has been undertaken. This paper analyses the socio-economic and environmental implications of intended decarbonisation in the East Asian region using a computable general equilibrium model that captures closed-linkages between the economy and climate change. The results show that the intended decarbonisation policy does not always reduce carbon emissions. Incorporating CCS technology into existing coal power plants and carbon tax implementation could reduce carbon emissions significantly in all countries in the region. However, supplementary fiscal policies might be needed to mitigate the possible negative economic impacts of these intended decarbonisation policies.