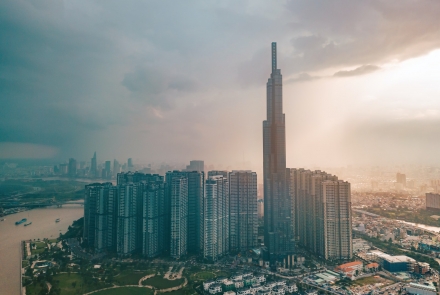 Photo by Tron Le on Unsplash

Paul Burke is a Professor in the Arndt-Corden Department of Economics, Crawford School of Public Policy. His research interests include energy economics, environmental economics, and Asia-Pacific economies. He teaches IDEC8029 Issues in Applied Microeconomics and IDEC8089 Energy Economics.

Reducing greenhouse gas emissions is a matter of national interest for Vietnam, one of the most vulnerable countries to global climate change. Serious local air pollution, particularly in large cities, has also increased the case for effective emission reduction policies.

A revised Law on Environmental Protection, which will take effect on 1 January 2022, legalises carbon pricing in the form of an emissions trading scheme (ETS) for greenhouse gases. A carbon tax could also be developed under the overall framework provided by this law.

Our new paper in Energy and Climate Change investigates options for carbon price adoption in Vietnam. The work was carried out under The Australian National University’s Zero-Carbon Energy for the Asia-Pacific Grand Challenge project.

The paper finds that low carbon prices of $1.85 and $3.86 per tonne on fossil fuel sources, starting from 2022 and increasing at a real rate of 10 per cent per year, would have the potential to reduce emissions from fossil fuel combustion by about 5.5 per cent and 11.2 per cent respectively, relative to business as usual by 2030.

Importantly, this would be consistent with achieving Vietnam’s unconditional and conditional Nationally Determined Contribution (NDC) targets for the energy sector.

The research suggests that a carbon tax would be particularly suitable and could be introduced simply by adjusting existing levies on coal and oil products and introducing a new levy on natural gas. An ETS, on the other hand, performs well in terms of perceived political viability.

A risk with an ETS, however, is that its emissions cap could be set too loosely, undermining the effectiveness of the scheme. This is a particular concern given that Vietnam formally anticipates a rapid increase in its emissions under its current NDC targets.

It is possible to have both an ETS and a carbon tax at the same time. The benefit of doing so would be reduced uncertainty over revenue collections and emissions levels, as a carbon tax would function as an effective price floor.

A gradual introduction of carbon pricing, starting with a modest price and a scheme focused on the energy sector, appears suitable in Vietnam’s context.

Strengthening capacity in monitoring and enforcement is crucial for carbon pricing to work well. Effective communication would also be important for aiding the public’s understanding about the benefits of carbon pricing.

On top of its environmental benefits, carbon pricing will generate revenue that could be used to boost Vietnam’s competitiveness if spent on infrastructure and other investments.

Carbon pricing could also help Vietnam make the case to be exempt from any carbon border adjustments imposed by other countries and fully reap benefits from trading schemes such as the EU-Vietnam Free Trade Agreement.

Carbon pricing would also incentivise further solar and wind power uptake. This is urgently needed given that sources of financing for coal power investment have reduced, and the need to move on from coal-powered electricity.

Vietnam has huge opportunities in zero-carbon energy. A recent analysis found that the country has the potential to achieve over 90 per cent penetration of domestic solar and wind power, coupled with off-river pumped hydro energy storage, in its electricity mix at a competitive cost.

On top of this, a significant amount of local air pollution from fossil fuel burning could be avoided via carbon pricing. By improving environmental conditions, carbon pricing could help to reduce social pressures in Vietnam, where concern over pollution is mounting.

The COVID-19 recovery period is an ideal time for Vietnam to implement carbon pricing. Such a scheme would put the country on a more sustainable development path as it builds back from the pandemic.

An additional priority for Vietnam is to consider absolute emissions reductions plans and a pathway towards low, and eventually net zero, emissions levels.

More ambitious targets for clean-energy adoption under the National Energy Strategy and Power Development Plan 8 would also help. The topic of phasing out coal is also an important one to bring onto the agenda.

Unfortunately, a proper carbon pricing scheme is off the table in Australia for now, but Indonesia has this year started a trial of an emissions trading scheme for its power sector. There will be substantial interest in how it goes.

If Vietnam were to adopt a carbon price, this would help to generate further momentum in the decarbonisation efforts of the region.

This article is part of Policy Forum’s In Focus: Developing Asia section, which brings you analysis from experts on the policy challenges facing the region in the wake of the COVID-19 pandemic.