Intersectoral linkages and imports of Vietnam: An input-output approach 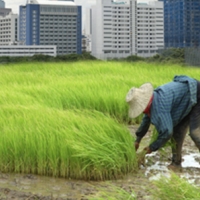 This study traces the intersectoral linkages, or the interdependence of industries, in Vietnam’s economy within the period of 2000-2012 using the input-output analysis. The total linkages–computed using Leontief inverse–are generally employed by policymakers in identifying critical industries for policy focus. However, for many countries that heavily dependent on imported inputs like Vietnam, total linkages can give an erroneous result. The paper shows how important are the domestic linkages, which is the inverse net of imports, in analyzing the importance of industries in the economy. By constructing the non-competitive input-output tables relying on the assumption that imports are distributed across industries in the same proportion as the gross domestic output of the corresponding industry, the paper finds that there are considerable divergences between total and domestic linkages. The results indicate that failure to take into account import dependence tends to overestimate intersectoral linkages of some key sectors in the Vietnamese economy.

Intersectoral linkages and imports of Vietnam: An input-output approach